I’ve spent so much time inside the addition, that I forgot to step back and look at the outside.  At how it relates to the old house, and to the streetscape and context.  These things are very important, especially in the historic district we’re in.  But I got so excited to start mentally occupying the space that I just plain forgot.

Well, it doesn’t look so bad from afar.

Not that I stepped outside of the yard.  I drive by slowly when I’m racing off to another jobsite meeting, and gawk.  In the evening when the gaggle of boot camp attendees are jogging by, I’m astonished that they don’t stop in their tracks and stare at the construction.  I guess they aren’t interested in the built environment when wiping that much sweat from their eyes.  I can’t not stop to stare, but I suppose that’s how I got into design in the first place.  An overabundance of interest in the built environment.

But the logistics are, that the garage is shown on the left.  It is a work-play-park space, with a finished concrete floor, operable windows, and a gorgeous stainless steel kitchen that was salvaged from an executive office.  We won’t install the dishwasher (now that would be overkill), but it’ll have a sink and small refrigerator.  We may replace the cooktop with a gumbo pot burner.  Or maybe it could be a lobster pot burner.  It’ll be a space where we can take refuge from the heat in the summer, without retreating to the full A/C of indoors.  And to detract from the big garage door, we added transom windows above which give us a different view to downtown as well as more light. 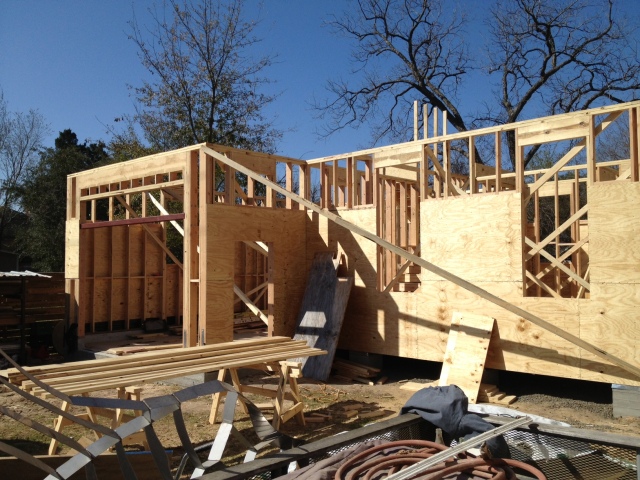 The panorama function on the Iphone is fun, but it really distorts the view, or perhaps it’s because I wiggle the phone too much while taking it.  Either way, it gives a little more information on the overall.  Including the official “potty”.

Despite the fact that the trusses are a few days away, the framing crew is continuing to work.  The stairs currently lead to nowhere, but have some beautiful shadows falling on them.  We’ll keep the kids out for now.

2 Responses to outside the box